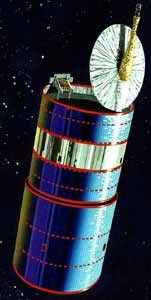 In November 1982, Mexico, in a major step toward unifying the rural and urban areas of the nation, ordered its first domestic communications satellite system from Hughes Aircraft Company. The two Morelos satellites (originally to be called Illhuica) are versions of the Hughes HS-376 and were launched on the space Shuttle June 17 and 27 November 1985.

Mexico was the first customer to use the HS-376 as a hybrid satellite operating in two frequency bands (C and Ku) simultaneously. It also was the first Latin American country where Hughes Space and Communications Company is the prime contractor on a satellite project. In addition to the satellites, the contract called for Hughes to manufacture and install a tracking, telemetry, and command station to operate the Morelos system. The station is located about 10 miles southeast of Mexico City in Iztapalapa.

In the launch position with its telescoping solar panels retracted and its main antenna reflector folded down, Morelos measures 9 feet 4 inches high. On orbit with the panels extended and the antenna erected, the satellite is 21 feet 8 inches high. Morelos has a diameter of 7 feet 1 inch, and weighed 1422 pounds at the beginning of life on orbit. Four thrusters using 293 pounds of hydrazine propellant provide orbit and attitude control during the satellite's 9-year planned mission life. The two solar panels, using K-7 solar cells, generated slightly more than 950 Watts of electrical power at beginning of life. Two nickel-cadmium batteries power the spacecraft during eclipse operations when it passes through the earth's shadow.

Although the Morelos bus design is that of a standard HS-376, the antenna system is tailored to meet Mexico's communications needs. The design is the first on a Hughes satellite to use a planar array. The four Ku-band channels use the planar arrays for reception only and have a bandwidth of 108 MHz with a minimum effective isotropic radiated power (EIRP) of 44 dBW throughout Mexico. The transmit and receive beams in the C-band and the transmit beams in the Ku-band are created by a 6-foot-wide shared aperture grid antenna with two polarization-selective surfaces. The front surface is sensitive to horizontally polarized beams and the rear is sensitive to vertically polarized beams. Separate microwave feed networks are used for the two polarizations. The 12 vertically polarized narrowband channels have a bandwidth of 36 MHz, and the six horizontally polarized wideband channels have a bandwidth of 72 MHz. The C-band EIRP is 36 dBW throughout Mexico. The narrowband C-band transponders use 7 watt traveling-wave tube amplifiers (TWTAs) with 14 for 12 redundancy. The wideband C-band transponders use 10.5 watt TWTAs with eight for six redundancy. The Ku-band transponders use 20 watt TWTAs with six for four redundancy.

Each satellite used a McDonnell Douglas payload assist module (PAM-D) to propel it into an elliptical transfer orbit after being released from the shuttle. Sitting in its special cradle, the satellite used only one-seventh of the Shuttle's cargo bay capacity. The shuttle carried the satellite to low earth orbit. The cradle's protective sunshield was opened, and a spin table at the base of the cradle spun the satellite to 55 rpm to provide gyroscopic stability. Four springs pushed the satellite into space; 45 minutes later, an onboard sequencer fired the PAM. A Thiokol Star-30B apogee kick motor was fired by command and placed the satellite into a circular synchronous orbit. When the satellite was near its operating position, the reflector antenna and the electronics shelf were despun with respect to Earth and achieved close pointing accuracy using a beacon tracking system. The remainder of the bus and solar panels continue to spin for stability. The satellite drifted into final orbit and was placed in operating position through the use of the onboard thrusters. The Morelos satellites are positioned at 113.5 degrees West longitude and 116.8 degrees West longitude.