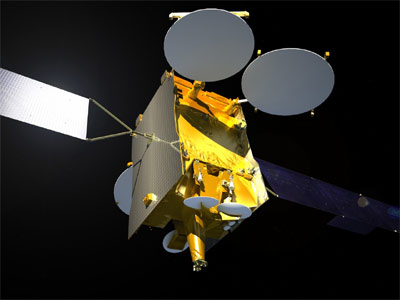 Eutelsat Communications announced in May 2009 that it has selected Astrium to deliver its new Atlantic Bird 7 satellite for 7 degrees West. Scheduled for launch in 4th quarter 2011, the satellite will be located at a key neighbourhood for digital broadcasting markets in the Middle East and North Africa, which Eutelsat operates in close collaboration with the Egyptian satellite operator Nilesat. The launch vehicle will be selected by Eutelsat at a later stage.

By increasing the volume of Eutelsat's operational Ku-band transponders at 7 degrees West from 26 to up to 50, Atlantic Bird 7 will virtually double the Group's in-orbit resources at this position. This new capacity will be brought into operation alongside the Nilesat 101 and 102 satellites operated by Nilesat, which are scheduled to be joined in mid-2010 by Nilesat 201. Within the framework of this collaboration the two companies have agreed to jointly brand 7 degrees West as the “NILEBIRD” neighbourhood.

Atlantic Bird 7 will be based on Astrium's Eurostar E3000 platform. Optimised for high-growth broadcasting markets, two beams will give superior coverage across the Middle East, including Gulf states, as well as North Africa and North-West Africa. Up to 44 Ku-band transponders will be connected to a broad high-power footprint serving the Middle East and North Africa for Direct-to-Home (DTH) broadcasting. A second footprint for North-West Africa, across the Maghreb countries and extending down to the Gulf of Guinea, will be connected to a payload of up to 12 Ku-band transponders designed for consumer broadcasting services and equipped to meet high demand for Internet access services.

In December 2011 Eutelsat announced, that their satellite assets will be renamed under a unified brand name effective from March 2012. This satellite became Eutelsat 7 West A.

Capacity leased by Nilesat is marketed as Nilesat 104.