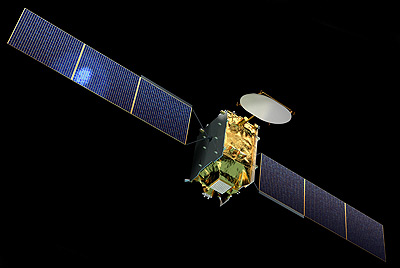 Eutelsat Quantum is an experimental communications satellite with a software reconfigurable payload It is developed jointly by ESA, Eutelsat and Airbus Defence and Space.

The Quantum programme is a departure from the traditional, custom, one-off approach to building satellites by offering a new and generic payload design. For the first time, it will enable users to request the performance and flexibility they need in terms of coverage, bandwidth, power and frequency.

The satellites developed under the Quantum umbrella will be cheaper and quicker to build compared to current methods by using generic subsystems and equipment, enabling larger-scale production and more efficient control of stock.

Quantum will also be able to completely transform in orbit. Once in space, the chameleon-like satellite can adapt to new commands in coverage, frequency band, power use and even change its orbital position. This will make it the first generation of universal satellites able to serve any region of the world and adjust to new business without the user needing to buy and launch an entirely new satellite.

This ability to mirror or complement another satellite anywhere in geostationary orbit will transform fleet management and result in a significantly more efficient use of resources.

SSTL will provide the bus based on the GMP-TL Bus platform. The spacecraft will use conventional thruster propulsion. The reconfigurable all Ku-band communications payload will use 5 kW of power. The phased array antenna is being provided by Airbuss Spanish CASA division.

The first Quantum satellite will be delivered in 2018 and operated by Eutelsat to serve government, mobility and data markets. Airbus DS will be the prime contractor, using a new platform from Surrey Satellite Technology Limited (SSTL). Both developments are supported by the UK Space Agency. The satellite was delayed to 3Q 2020.