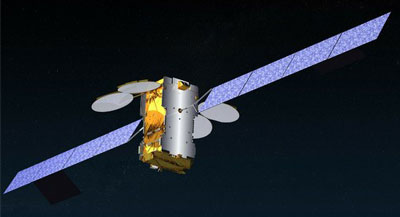 Eutelsat Communications has selected EADS Astrium in January 2008 to deliver its first satellite operating exclusively in Ka-band frequencies. The satellite will form the cornerstone of a major new satellite infrastructure program that will expand capacity for consumer broadband services across Europe and the Mediterranean Basin, while providing new opportunities for local and regional television markets. Currently called KA-SAT and scheduled for launch in third quarter 2010, the satellite will be configured with more than 80 spotbeams. A network of eight gateways managed by Eutelsat, and which will provide access to KA-SAT, will form an integral part of the new infrastructure.

Eutelsat will locate KA-SAT at 13° E where it will join three large HOT BIRD Ku-band broadcasting satellites. This collocation will enrich the range of consumer entertainment services offered from the Group's prime neighbourhood by enabling satellite homes to receive television in the Ku-band and new rich media services in the Ka-band through a single dual-frequency antenna. In advance and in preparation of KA-SAT, Eutelsat is using Ka-band capacity on its HOT BIRD 6 satellite for a new consumer broadband service, launched in Europe at the end of 2007, and called Tooway. The service is operated by the Group's broadband subsidiary Skylogic, in cooperation with ViaSat. Tooway uses ViaSat's well established SurfBeam system. KA-SAT is the European equivalent to ViaSat-1, a high-capacity Ka-band broadband satellite ordered by ViaSat to serve the North American market and planned to launch in 2011. ViaSat and Eutelsat are cooperating closely around ViaSat's Ka-band SurfBeam networking system and a similar wholesale business model that works through ISPs, telecommunications companies and pay-TV platforms to serve subscribers. KA-SAT marks a material step forward in multi-spot satellites. In particular, 1stgen multi-spot satellites using ViaSat SurfBeam technology and operated by WildBlue and Telesat have already reached more than 300,000 Internet subscribers since their launch in 2005. As a standard used by several tens of millions of cable customers worldwide, DOCSIS, together with powerful new Ka-band multi-spot satellites can facilitate important economies of scale to enable satellite-based consumer Internet services to achieve costs and bandwidth comparable to ADSL.

KA-SAT, coupled with ViaSat's next generation SurfBeam, will deliver a total throughput of over 70 Gigabits per second. Based on the EUROSTAR Eurostar-3000 platform, KA-SAT is the 17th satellite commissioned by Eutelsat from EADS Astrium. Designed to operate for 15 years, it will have a launch mass of 6.15 tons and a payload consuming more than 11 kW of power, with solar arrays generating 15 kW of power.

In December 2011 Eutelsat announced, that their satellite assets will be renamed under a unified brand name effective from March 2012. This satellite became Eutelsat KA-SAT 9A.