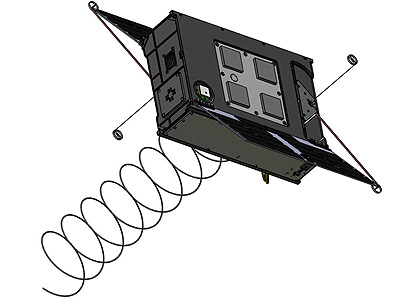 ELO Alpha (Eutelsat LEO for Objects) is a 6U CubeSat built by Tyvak International SRL, a subsidiary of Terran Orbital Corporation, as a prototype for Eutelsat's low earth orbit Internet of Things (IoT) constellation.

ELO will be used to assess the performance of low earth orbit (LEO) satellites in providing narrowband connectivity for objects. The satellite operator will be drawing on the technology of Sigfox, which runs a unique global narrowband network dedicated to the IoT.

Sigfox will work with Eutelsat on two aspects: analyse the spectrum used by the satellite in ISM frequency bands; and process data from objects. ELO will also test connectivity in other frequency bands. The synergies developed through the partnership with Sigfox, as well as with other strategic alliances in the telecom industry, should open up new opportunities for Eutelsat in this fast-growing market.

Orbiting in an sun-synchronous orbit between 500 and 600 km in altitude, the satellite will collect data from connected objects across the globe equipped with the same omni-directional antennas already used by terrestrial IoT networks. Data will then be transmitted daily to a ground station located on Svalbard, a Norwegian archipelago in the Arctic Ocean.