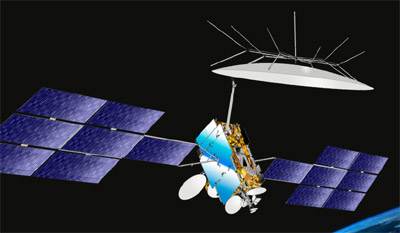 Eutelsat Communications and Alcatel announced in September 2006 that Eutelsat has retained Alcatel Alenia Space for the design, manufacturing, assembling, tests and on-ground delivery of the Eutelsat W2A satellite.

Due to be launched in first quarter 2009, the main mission of this powerful new satellite will be to extend Ku-band capacity for video, broadband and telecommunications services in Europe, Africa and the Middle East, and boost the C-band capacity available through Eutelsat's fleet for services across Africa.

Eutelsat has also asked Alcatel to proceed with head start activities for a state-of-the-art S-band payload at 2.2 GHz on W2A. A final decision on flying the S-band payload will be taken by Eutelsat in October following completion of a full assessment of market demand, the regulatory framework and financing.

Based on the Alcatel Alenia Space Spacebus-4000C4 platform, W2A's baseline mission comprises up to 46 transponders in Ku-band and a C-band payload of 10 transponders. The Ku-band payload will provide up to 37 transponders connected to a fixed Widebeam serving Europe, North Africa and the Middle East, which will enable Eutelsat to provide capacity for business networks and broadcasting services and additional capacity for expansion of services. Additionally, up to 12 Ku-band transponders will be connected to a second fixed beam serving southern Africa and Indian Ocean islands. The C-band mission of 10 transponders will provide pan-African coverage for broadband and telecommunications services.

The state-of-the-art S-band payload at 2.2 GHz on W2A would allow the delivery, for the first time, of mobile multimedia broadcast services (Mobile TV, digital radio, ...) directly onto user terminals over key markets in western Europe. It will therefore initiate the building of hybrid infrastructure over Europe, combining satellite and terrestrial networks, providing both universal coverage and indoor penetration for Mobile TV services. W2A will also enable direct satellite communications, for example for security communications or crisis management.

Designed with a lifetime of more than 15 years, W2A has a maximum launch mass of 5.7 tons and will deliver 11 kW of payload power.

The 12-meter-diameter S-band antenna aboard the Eutelsat W2A satellite has suffered an anomaly that prevents its ability to provide service across Europe as required by its regulatory license.

In December 2011 Eutelsat announced, that their satellite assets will be renamed under a unified brand name effective from March 2012. This satellite became Eutelsat 10A.