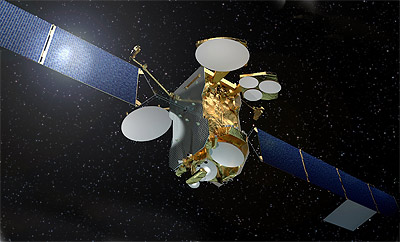 Eutelsat 172B is a communications satellite featuring a C-band, a Ku-band and a high throughput payload and all electric orbital raising.

Airbus Defence and Space has been awarded in July 2014 a contract by Eutelsat to design and build a highly innovative high-performance (hosting a C-band, a Ku-band and a high throughput payload) telecommunications satellite.

Eutelsat 172B is being built by Airbus Defence and Space and is based on the Eurostar E3000 platform, representing its latest evolution EOR (Electric Orbit Raising). This version uses only electric propulsion, the Fakel SPT140D propulsion unit, for initial orbit raising and all on-orbit manoeuvres, with the reduction in mass enabling the powerful satellite to be launched with the Ariane-5ECA lower position, offering lower launch costs. In-orbit raising is expected to take approximately four months.

The satellite will have electric power of 13 kW, with a launch weight of only 3,551 kg. It also incorporates other state-of-the-art solutions, in particular the flexibility to dynamically distribute power between the set of beams connected to its high throughput payload.

The new satellite was launched in June 2017, making it the first European satellite to demonstrate electric propulsion for orbit raising.