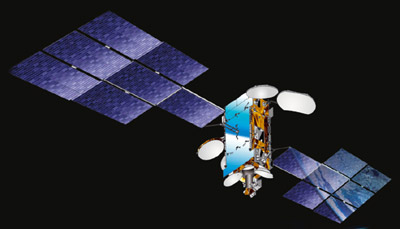 To be launched in second quarter 2009 at Eutelsat's 36 degrees East location, W7 will double the capacity currently available at a key neighborhood in the Group's fleet of geostationary satellites. Through a configuration of high-performance fixed and steerable beams, W7 will also boost coverage and flexibility for addressing growing markets, notably in central Asia and Africa.

W7's mission comprises up to 70 Ku-band transponders that can be connected to six beams serving Europe, Russia, Africa, the Middle East and central Asia. To be co-located with Eutelsat's W4 satellite, which already serves anchor pay-TV operators in Russia, Ukraine and sub-Saharan Africa, W7 will enable Eutelsat to almost double bandwidth for digital video services in these regions. It will also replace all capacity on Eutelsat's SESAT 1 satellite which serves Europe, North Africa, the Middle East and central Asia, and bring fresh capacity to South Africa through a high-power fixed beam and to central Asia through a spot beam which can be reoriented in orbit. Following W7's deployment at 36 degrees East, SESAT 1 will continue in commercial service at an alternative location.

Weighing in at 5.6 tons and with 12 kW of payload power, W7 is based on the Alcatel Alenia Space Spacebus-4000C4 platform and was to be boosted into orbit by a Sea Launch Zenit-3SL (2), but was rebooked in summer 2009 for a launch on a Proton-M Briz-M vehicle.

In December 2011 Eutelsat announced, that their satellite assets will be renamed under a unified brand name effective from March 2012. This satellite became Eutelsat 36B.