Eutelsat 9B / EDRS A 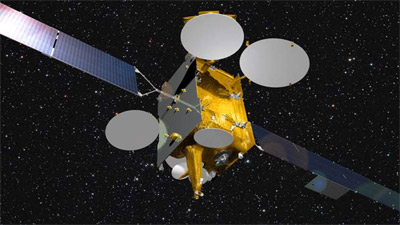 Astrium has been selected in October 2011 by Eutelsat Communications to build Eutelsat 9B, a high-power broadcast satellite addressing high-growth video markets in Europe, to be launched at the end of 2014 and located at Eutelsats 9°E video neighbourhood.

Over its 15-year mission lifetime, EUTELSAT 9B will operate up to 66 Ku-band transponders connected to a broad European widebeam and four regional beams over European countries. It will increase Eutelsats capacity for video services in Europe, providing wide coverage for channels seeking maximum reach into satellite homes and terrestrial headends, as well as regional footprints addressing linguistic markets for digital TV in Italy, Germany, Greece and the Nordic/Baltic regions.

In addition to its broadcast mission, EUTELSAT 9B will host the EDRS A data relay payload for the European Data Relay Satellite System being implemented through a Public-Private Partnership (PPP) between Astrium and ESA. The EDRS system of telecommunications satellites in geostationary orbit will enable very high data rate, bi-directional data relay communications between Low Earth Orbit Earth observation satellites and an associated ground segment.