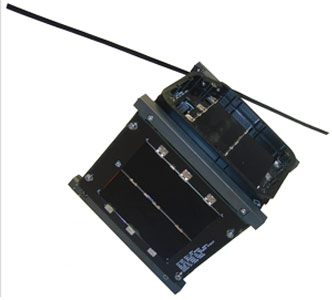 The Cal Poly Picosatellite Project (PolySat) was founded in 1999 and involves a multidisciplinary team of undergraduate and graduate engineering students working to design, construct, test, launch, and operate a CubeSat.

CP2 is Cal Polys second satellite. Development began around Fall of 2003 and was officially called done in March of 2005. The team behind CP2 contained engineers from several disciplines, including Mechanical Engineering, Electrical Engineering, Computer Science, Computer Engineering and Aerospace Engineering. Many lessons were learned from the design and construction of CP1 and put to good use with CP2.

The primary missions of CP2 were an energy dissipation experiment as well as a field-test of what the team has dubbed the CP Bus. CP2 marks the first attempt at standardizing a CubeSat bus to enable easier integration of a wide variety of payloads.

The launch of CP1 and CP2 was not successful, as the Dnepr failed 86 sec after launch.

CP4 (also called CP 2.1) was a reflight of the CP2 mission using the backup flight model.