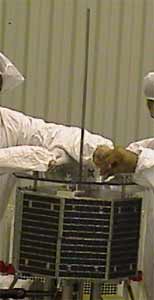 UniSat (University Satellite) are a series of small (~12 kg) satellites developed at the Scuola di Ingegneria Aerospaziale by the Gruppo di Astrodinamica dell'Università degli Studi “La Sapienza University of Rome” (GAUSS) to perform technology experiments and to check the use of non space rated equipment in space.

The UNISAT program has been the first university program in Italy intended for promoting the use of commercial technologies in the aerospace field, performing in-orbit tests of up-to-date technologies, with short development times and with a remarkable cost reduction.

In the first prototype UNISAT-1, flown on board a Dnepr launch vehicle on September 26th 2000, the technological issues prevailed over scientific motivations as the main goal was the acquisition of space hardware manufacturing experience for next missions. The technological payloads hosted on-board the spacecraft (terrestrial technology solar panels, commercial battery packs assembly, ad-hoc developed attitude control hardware) were flown following this design philosophy. Once flight tested, these experimental payloads were also integrated in the UNISAT-2 bus (launched in December 2002).

The launch of UNISAT 4 was not successful, as the Dnepr failed 86 sec after launch.