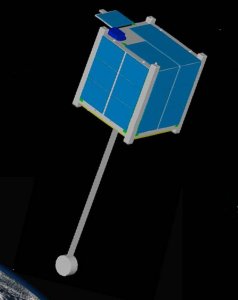 The ICECube (Ionospheric sCintilation Experiment Cubesat) Project was Cornell's version of the Stanford University's Cubesat program in conjunction with California Polytechnic State University. The goal of CubeSat was to provide an effective framework for the design, construction and launch of picosatellites by students at Cornell, Stanford, Cal Poly and other institutions. Once completed, the CubeSats will deliver small payloads into Earth orbit and perhaps fly in formation. ICECube had a mission profile of this type with two satellites flying near each other.

ICECube was to be conducting GPS (Global Positioning System-satellites in orbit around earth that can tell you the exact position and elevation/altitude where you are located) scintillation science. The Cubesats were to be measuring fluctuations in the signals that the GPS satellites emit when the signals pass through a part of the earth's atmosphere known as the ionosphere. In certain positions on earth and at certain times of day, sunlight heats the ionosphere and causes severe turbulence. This interferes with the signal being sent. ICECube was to measure the scintillations from orbit. They have already been measured from the ground of earth.