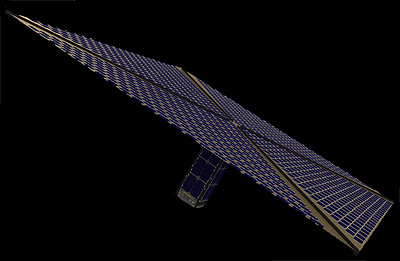 PowerSat is a 3U CubeSat designed by the California Polytechnic State University, San Luis Obispo, in partnership with Deployables Cubed GmbH, Germany. PowerSat aims at demonstrating the deployment of a large solar array capable of producing up to 100 W.

The power generated will be handled by a Maximum Power Point Tracking (MPPT) based electrical power subsystem being developed in-house by the Cal Poly CubeSat Laboratory (CPCL). Following launch, the solar array stowed in a 1U volume will unfurl like origami to a 4 m2 area and pictures will be taken from space to validate the solar array deployment.

Both novel technologies hold potential for the CubeSat industry and have yet to be proven at this scale and capability by any previous missions. If a successful demonstration is executed, PowerSat will serve as a pathfinder mission for future CubeSats to expand the applications of high power systems in small satellites, such as improved communication systems, electric propulsion, and lunar exploration.

PowerSats 3U bus is being developed by an interdisciplinary team of undergraduate and graduate students at CPCL, who are actively involved in the design work and oversight of the missions full lifecycle.