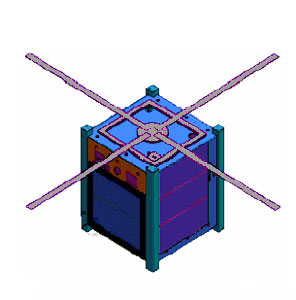 The KUTESat Pathfinder (Kansas Universities' Technology Evaluation Satellite) is a joint venture among several universities located in the state of Kansas that aims to promote interest in space activities while establishing the capability to design, build, test, and operate satellites at the University of Kansas.

The KUTESat satellites are 10 cm cube pico satellites. The program consists of three mission phases, each with its own purpose, development, and testing program. The objective of the first phase of the of the KUTESat program is to design, develop, and operate a simple CubeSat called Pathfinder, which will be flown in a low earth orbit (LEO). The primary mission of this satellite is to measure the radiation in LEO and take photographs with an onboard camera. The second phase of the program is to build an engineering demonstration of the satellite with an onboard attitude control system using miniature thrusters. This prototype will then be tested in the neutral gravity environment by flying it as an experiment on the NASA JSC KC135 or similar aircraft. The final phase of the KUTESat mission involves developing and testing three different prototype satellites. The Inspection Sensor Satellite (ISS) will do the imaging inspection of a target with its complete translational and rotational capabilities. The Space Environment Satellite (SES) will measure the space environment away from the mother ship. The Target Relay Satellite (TRS) will then act as a target for the ISS and as a relay satellite for both the ISS and the SES to communicate with the ground. The overall project name for this third phase of the program is Mission of ISS, SES, TRS, or also known as MIST.

Since its conception a year ago, the KUTESat Pathfinder project has undergone three major phases of design reviews; the System Concept Review, the Preliminary Design Review and the Critical Design Review. With the design and the components finalized, procurement of the various components of the satellite has begun and construction and testing will follow shortly. The team is establishing a clean room in the University of Kansas hangar at the Lawrence Airport and obtaining the necessary materials. This facility will house both the construction and testing of the satellite.

Planning, management, design, construction, and testing are completely student driven. The program is open to graduate and undergraduate students attending a college or university in the state of Kansas. A graduate student heads each subsystem with one or more undergraduates working under his/her guidance based on the requirements and the amount of work. With a doctoral student, 6 graduates and around 15 undergraduates working on the design of this satellite for more than a year and with various inputs from other universities working on Cubesats has given each participant an insight into the design of satellites. Everyone is excited to begin the construction and testing of the prototype, and all those working on the project are determined to see the satellite in space. Once the satellite is launched into orbit, the University of Kansas will have the distinction of the being the first university in the state of Kansas to have designed, constructed, and launched a satellite into space.