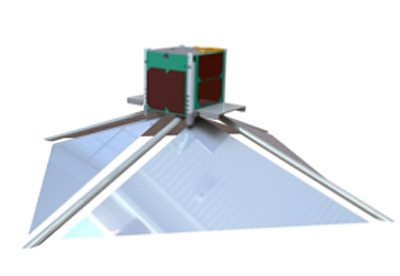 CP 14 or ADE (Aerodynamic Deorbit Experiment) is an 1U CubeSat designed by the California Polytechnic State University, San Luis Obispo, and Purdue University for a technology demonstration of passive drag sail.

The primary mission objective of the Aerodynamic Deorbit Experiment (ADE) spacecraft is to demonstrate the viability of a deployable drag sail that could be used in future space missions to significantly reduce satellite deorbit times. As a secondary mission objective, ADE will attempt to characterize the radiation environment in its trajectory, which runs through both the inner and outer Van Allen belts each orbit. The project was conceived in early 2017 by the Purdue University Spaceflight Projects Laboratory, which requested assistance, direction, and hardware from Cal Polys PolySat lab. Since then, Cal Poly and Purdue University have been collaborating on the design of the spacecraft bus to support the drag sail payload, which is being designed by a Ph.D student at Georgia Institute of Technology.

A unique challenge for this mission is the necessity to withstand an extremely heavy radiation environment. To resolve this, the thickness of shielding material that will keep the spacecraft alive for a sufficient duration will be determined. Finding a solution to the radiation issue has been a great learning opportunity for the engineers on the team, and has made the overall spacecraft design challenging yet rewarding. ADE is expected to launch in early-2019, and will be operated by ground stations at Cal Poly, Purdue, Arizona State University, and Georgia Tech.

The ADE 1U CubeSat will be deployed from the Centaur upper stage on a future United Launch Alliance launch. The baselined orbit for the ADE mission is geosynchronous transfer orbit (GTO), with perigee/apogee orbit altitudes of 185 km/35756 km and an inclination of 27.0 deg. The expected orbital lifetime of ADE is 50-250 days following deployment of the drag device. With no drag device, a standard 1U CubeSat would remain in orbit for approximately 2,500 days (6.85 years).