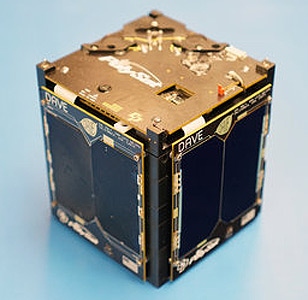 CP 7 or DAVE (Damping And Vibrations Experiment) is a collaboration between Northrop Grumman Aerospace Systems and PolySat. The payload is a particle dampening experiment designed to measure its frequency response in microgravity.

PolySat is developing a 1U CubeSat for this technical feasibility demonstration, which may lead to future applications in spacecraft vibration mitigation. Particle dampeners hold the promise of providing superior performance at a reduced cost compared to existing technologies.

Particle dampers are mechanical damping devices that consist of an enclosed cavity filled with particles. When the particles are subjected to vibration the momentum exchanges and frictional forces of these particles create a damping effect that can be optimized to suit a number of applications over a broad frequency and amplitude range. In space based applications, these particle dampers could potentially serve as a robust and simple device to eliminate jitter in optical assemblies or other sensitive scientific equipment. However, particle dampers have never been tested in a microgravity environment, and modeling their performance in microgravity proves problematic, as their effectiveness is highly nonlinear and dependent on orientation with gravity.

The proposed experiment provides data to characterize two variations of these dampers under microgravity conditions. Their performance will be compared to a control and ground based test. The experimental set up consists of the two particle damper configurations and one mass model control, each fixed to a cantilever beam. These beams are driven over a frequency range centered on their first mode resonant frequency. Through the observation of their steady state response, a mathematical model is used to assess the damper performance. By repeating this test under a range of input amplitudes, the degree of nonlinearity in the dampers is ascertained. The conclusions of this experiment will determine the feasibility of using particle dampers in space and provide reliable models on which to base further investigation or actual space based applications.

The satellite wass manifested as an ELaNa-14 back-up payload on the JPSS 1 launch, in case one of the other cubesats is not available for this launch. Eventually it got manifested on the ELaNa-18 mission on the ICESAT 2 launch.