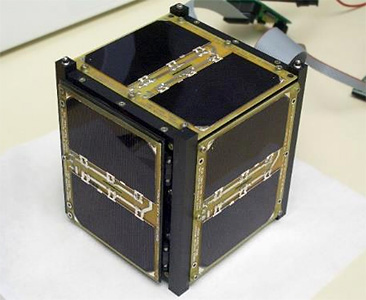 HAUSAT-1 (Hankuk Aviation University SATellite-1) was the first picosatellite in South Korea developed by graduate students. The primary mission objective of HAUSAT-1 development was to offer graduate and undergraduate student great opportunities and help them understand the whole development processes of satellite design, analysis, manufacturing, assembly, inefration, test, launch, and operation, and consequently make them specialists in the field of satellite development.

The satellite was built to the 1U CubeSat for factor specification. Actual mission objective in accordance with on-board payload are as followings; collecting the satellite position data with spaceborne GPS receiver, experiment on deployment mechanism of solar cell panel, space verification of homemade sun sensor, and getting data related to satellite Status of Health (SOH) from various sensors.

The HAUSAT-1 is designed with controller based on standby and warm redundancy. The payloads incorporated are a spaceborne GPS receiver, solar panel deployment mechanism, and a homemade sun sensor. A mass storage memory has 60 Mbits storage volume, which is a flash type having nonvolatile characteristic. Average power generated is about 1.5 Watt. Communication band width is amateur HAM band and UHF/VHF antenna with dipole/monopole configuration which is made of flexible steel can be folded easily.

The HAUSAT-1 was to orbit at the altitude of perigee 600 km and apogee 650 km either 65 or 98 degree inclination angle for one year of design mission life. The HAUSAT-1 was planned to launch in the middle of 2004. HAUSAT-1 project was supported and funded by Space Core Technology Development program in MOST.

The launch in July 2006 was not successful, as the Dnepr rocket failed 86 seconds after launch.

A second 1U CubeSat was built as KAUSAT 3, but it was reduced to ground based education mission and was never launched.