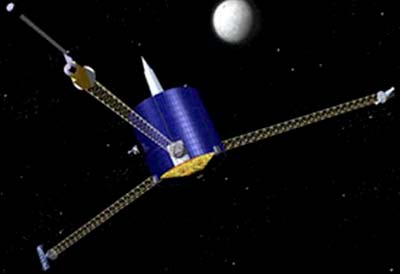 The Luar Prospector was launched on an launch vehicle with additional Trans-Lunar-Injection-Stage (TLIS). TLIS consisted of an ATK build spin stabilized Star-Stage-3700S powered by a Star-37FM motor.

Some of the spacecraft's scientific instruments, also measured the Moon's magnetic and gravitational fields, enhancing our current understanding as well as potentially enabling future mission scientists to design more fuel-efficient journeys to the Moon. In addition, Prospector will carry a special instrument, called an Alpha Particle Spectrometer (APS), that will sniff out small quantities of gases that leak out from the lunar interior.

A Magnetometer (MAG) and the Doppler Gravity Experiment (DGE) complemented the scientific payload. After the end of its mission the spacecraft was crashed on the lunar surface.

Lunar Prospector carried also a small capsule by Celestis called Celestis-02 with the ashes of the late Gene Shoemaker.