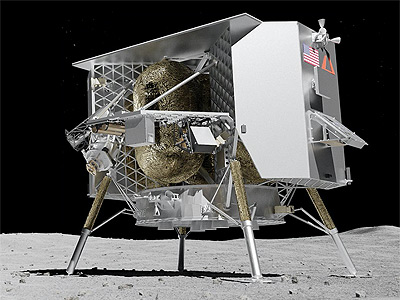 Peregrine is a lunar lander privately developed by Astrobotic Technology for the Google Lunar-X-Prize.

The Peregrine Lunar Lander will fly 35 kilograms of customer payloads on its first mission, with the option to upgrade to 265 kilograms on future missions. Already 11 deals from six nations have been signed for this 2019 mission. The first mission in 2019 will serve as a key demonstration of service for NASA, international space agencies, and companies looking to carry out missions to the Moon.

In July 2017 Astrobotic Technology announced, that they have selected ULA to launch the Peregrine mission in 2019 on a shared Atlas-5 rocket, which is too late for the Google Lunar X Prize, but which will serve as a pathfinder for future commercialization.

In May 2019, Astrobotic's Peregrine was selected by NASA's Commercial Lunar Payload Services (CLPS) program to deliver up to 14 payloads to Lacus Mortis by July 2021 to support the Artemis lunar program. The Peregrine lander might be launched either on a shared or dedicated launch vehicle. In August 2019 it was announced, that Perregrine 1 will fly on the maiden Vulcan Centaur VC2S rocket, likely on a shared launch.

Following NASA payloads have been selected for the mission:

Also on board will be DLR's M-42 radiation detector.