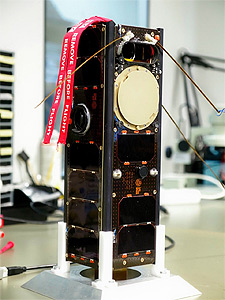 The payload consists of an X-Ray Detector (iXRD) and a camera system with a visual band. The goal is to measure X-Rays from space and take pictures of Earth with at least 100 meter/pixel GSD. An S-Band transmitter will be used to download the images captured by the cameras as well as the iXRD data. The satellite is being developed for iXRD by the University of Sharjah SAASST in collaboration with Istanbul Technical University's Faculty of Aeronautics and Astronautics, Space Systems Design and Test Lab (SSDTL), and Sabanc University.

The CubeSat components are integrated and assembled inside SAASST's cleanroom, which ensures the safety of the sensitive electronics and instruments. The initial tests are also carried out in the cleanroom, but the qualification and acceptance tests, which require specialized facilities, are carried out at other locations. SAASST's ground station will be used for communication once SharjahSat-1 is in orbit (Telemetry, Tracking, and Commanding).