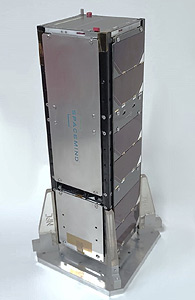 Futura SM1 is a 3U Cubesat developed by NPC SpaceMind.

The main goal of Futura-SM1, which is based on a 3U CubeSat platform designed to operate in low-Earth orbit, is to demonstrate the NPC SPACEMIND 3U platform in-orbit alongside ARTICA, an innovative deorbiting sail device whose goal is to highly accelerate the orbital decaying time, offering a solution to the problem of space debris.