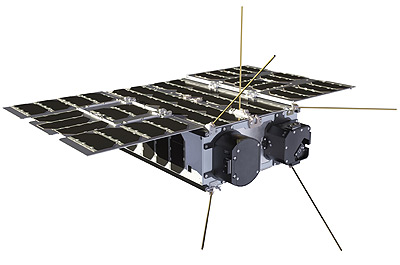 The MilSpace2 (formerly BROS (Binational Radiofrequency Observing Satellites)) satellies, named Birkeland and Hyugens, are a pair of Norwegian and Dutch nanosatellites for researching, which are operated by a consortium consisting of consists of the Norwegian Defence Research Establishment (FFI), the Royal Netherlands Aerospace Centre (NLR) and Netherlands Organisation for Applied Scientific Research (TNO).

The consortium selected satellite integrator NanoAvionics to build two nanosatellites in April 2020. The purchase order is part of a military use of space (MilSpace) project under a bilateral strategic mutual assistance in research and technology (SMART) memorandum of understanding (MoU). The two nanosatellites are intended to demonstrate the concept of a space based spectrum monitoring system to geolocate radar signals. It is the first time for Norway and the Netherlands to launch a formation of satellites.

The MilSpace2 mission is the first known two-satellite system to detect, classify, and accurately geolocate Radio Frequency signals, including navigation radars used on ships, by combining the measurement angle of arrival (AoA) and time difference of arrival (TDOA). Simultaneous detection of pulsed radio signals by both satellites flying in tandem enables accurate geolocation during all weather conditions.

The satellites are based on NanoAvioncs' pre-configured M6P nanosatellite bus with a deployable solar panel configuration, high precision attitude determination and control system (ADCS) and a propulsion system. The mass of each 6U CubeSat will be up to 10 kilograms. The launch of the two nanosatellites is scheduled for the second quarter of 2022 when they will be placed into a polar low Earth orbit (LEO) with an altitude range of 450 to 600 km. Both will be positioned in the same orbital plane with a separation of 15-25 km, allowing the two nanosatellites to simultaneously detect emissions from radar systems. For a polar LEO orbit of 600 km altitude, the payload antenna will be able to cover any point on the Earth's surface at least four times per day.

Drawing from experience from the Norwegian NorSat-3 and the Dutch BRIK-II missions, the consortium for this strategic and bilateral mission also expects to gain valuable insights into formation flying.