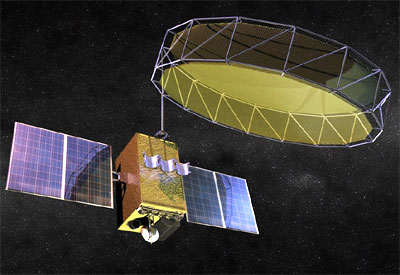 The indian Cabinet in December 2004 gave its approval to undertake design, develop & launch GSAT-6, a multi-media mobile satellite system, at a total estimated cost of Rs. 269 crores with a foreign exchange component of Rs. 102 crores. Indian Space Research Organisation (ISRO) proposes to build a state-of-the-art National Satellite System (GSAT-6 / INSAT-4E) that will offer a Satellite Digital Multimedia Broadcasting (S-DMB) service, via mobile phones and mobile video/audio receivers for vehicles. The satellite capability can also be utilized for strategic and social applications. This satellite will also provide a platform for developing techniques and technologies which will be useful in future satellite based mobile communication applications such as demonstration of large unfurlable antenna in spacecraft, handheld ground terminals and network management techniques.

GSAT 6/INSAT-4E will have five C × S transponders each of 9 MHz bandwidth and five S × C transponders each of 2.7 MHz bandwidth which will together cover the entire country. GSAT-6 / INSAT 4E is a part of GSAT/INSAT system planned for initiation in 10th Five Year Plan and the funds have been already provided in the approved 10th Plan. The GSAT-6 / INSAT-4E was launched in 2015 by the GSLV with a lift-off capability of 2100 kg. The life of the satellite will be 12 years.

A second satellite of the type, GSat 6A, was launched in March 2018 on a GSLV Mk.2(2) rocket. After the second orbit raising manouevre, the contact with GSat 6A was lost. GSat 32 will be launched as a replacement in 2019.