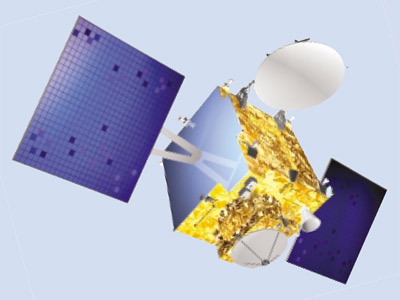 GSAT-12 is an Indian communications satellite being realised as replacement INSAT-3B. The satellite carries 12 Extended C-band transponders and is positioned at 83º East longitude colocated with Insat-2E and Insat-4A with a mission life of 7 years.

The bus system is based on I-1K (I-1000) platform with ASIC based BMU and 64 Ah Li-ion batteries. The satellite weighs 1375 kg with a payload power of 550W and launch is planned onboard PSLV-XL during 2010. The launch vehicle put the GSAT-12 into an elliptical transfer orbit (Sub-GTO) of 284 km perigee and 21000 km apogee. The satellites Liquid Apogee Motor raises both apogee and perigee and put the satellite into the circular geostationary orbit of 36000 km.

A similar replacement, GSAT 12R, was launched in December 2020.