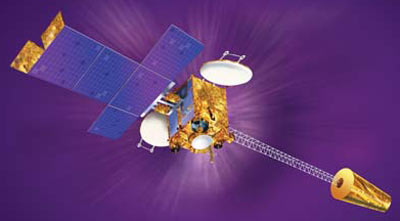 For meteorological observation, INSAT-3A carries a three channel Very High Resolution Radiometer (VHRR) with 2 km resolution in the visible band and 8 km resolution in thermal infrared and water vapour bands. In addition, INSAT-3A carries a Charge Coupled Device (CCD) camera which operates in the visible and short wave infrared bands providing a spatial resolution of 1 km. A Data Relay Transponder (DRT) operating in UHF band is incorporated for realtime hydrometeorological data collection from unattended platforms located on land and river basins. The data is then relayed in extended C-band to a central location.

INSAT-3A was launched by European Ariane-5G Launch Vehicle into a Geosynchronous Transfer Orbit (GTO) with a perigee of 200 km and an apogee of 35,980 km. The satellite is manoeuvered to its final orbit by firing the satellite's apogee motor. Subsequently, the deployment of solar array, antennae and the solar sail is carried out and the satellite is commissioned after in-orbit checkout.