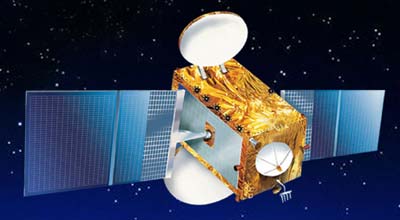 GSAT-3 or EduSat is the first Indian satellite built exclusively for serving the educational sector. It is mainly intended to meet the demand for an interactive satellite based distance education system for the country. It strongly reflects India's commitment to use space technology for national development, especially for the development of the population in remote and rural locations.

The 1950 kg EduSat is launched from Satish Dhawan Space Centre (SDSC) SHAR, Sriharikota, into a Geosynchronous Transfer Orbit (GTO) by ISRO's GSLV Mk.1(2) launch vehicle. From GTO, EDUSAT reached the 36,000 km high Geostationary Orbit (GSO) by firing, in stages, its on board Liquid Apogee Motor (LAM). In GSO, the satellite was co-located with Kalpana-1 and INSAT-3C satellites at 74 deg East longitude.

Compared to the satellites launched in the INSAT series so far, EduSat has several new technologies. The spacecraft is built around a standardised spacecraft bus called I-2K. It has a multiple spot beam antenna with 1.2 m reflector to direct precisely the Ku band spot beams towards their intended regions of India, a dual core bent heat pipe for thermal control, high efficiency multi-junction solar cells and an improved thruster configuration for optimised propellant use for orbit and orientation maintenance. The satellite uses radiatively cooled Ku-band Travelling Wave Tube Amplifiers (TWTAs) and dielectrically loaded C-band demultiplexer for its communication payloads.