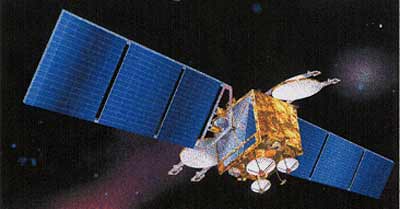 Insat-3B is the first of the five satellites was successfully launched under the Insat-3 series. Insat-3B carried 12 extended C-band transponders, three Ku-band transponders and S-band mobile satellite service payloads. The satellite is primarily intended for business communication, developmental communication and mobile communication. The launch of Insat-3B has been advanced to precede that of Insat-3A to cater to the immediate requirement of extended C-band capacity that was depleted due to Insat-2D failure.

Insat-3B weights 2,070 kg at lift-off. It has about 1100 kg of propellant (Mono-Methyl Hydrazine - MMH and Mixed Oxides of Nitrogen - MON-3) for raising it from the geo-synchronous transfer orbit to its final orbit as well as for station keeping and in-orbit attitude control for the duration of its designed life of 10 years. For the first time, an indigenously developed titanium propellant tank, with special propellant management device that ensures bubble-free propellant supply under zero-G environment, is being employed.

The satellite main body is a cuboid of 1.93 × 1.7 × 1.65 m and, with the two solar panels fully deployed in orbit, it will measure 14.7 m in length. The sun tracking, solar panels, with a total area of 23 sq m generate a 1.7 kW of power. A 24 Ah Ni-Cd battery supports the payload operations during eclipses. Insat-3B, like all its predecessors in the Insat series, is 3-axis body-stabilized using momentum/reaction wheels, earth sensors, sun sensors, inertial reference unit and magnetic torquers. It is equipped with unified bi-propellant thrusters. The satellite has two deployable antennas and three fixed antennas that carry out various transmit and receive functions. The antennas have a pointing accuracy of ±0.2° in pitch and roll axes and ±0.4° in yaw axis. The satellite uses passive thermal control system.

Insat-3B communication payload provides 12 extended C-band channels, each having a bandwidth of 36 MHz. The Ku-band payload provides three channels, having a bandwidth of 77/72 MHz. The Mobile Satellite Service transponders operate in C/S band frequencies. Compared to Insat-2C/2D, the power of extended C-band transponders on board Insat-3B has been increased from 10 W to 15 W and that of Ku-band from 20 W to 55W.

Insat-3B has undergone extensive qualification programmes to evaluate each spacecraft function under different environmental conditions that it may encounter. The satellite has undergone vibration, shock and acoustic tests to the level of expected launch environment and it has been tested in its orbital configuration in thermo-vacuum chamber. Deployment tests for solar arrays and antennas, antenna pattern tests, closed-loop functional tests for attitude control system, etc, have also been carried out.

The Ariane-5G rocket will inject Insat-3B into a geo-synchronous transfer orbit of 560 km perigee and 35,865 km apogee with an inclination of 7° with respect to the equatorial plane. From this orbit, Insat-3B was taken to its final geo-stationary orbit at a height of about 35,800 km in the equatorial plane by firing, in stages, the 440 Newton thrust liquid apogee motor on board the satellite. The higher perigee height of 560 km at the time of injection by Ariane-5, compared to 200 km in earlier Insats launched by Ariane-4, results in lesser propellant consumption for orbit raising operations -- an equivalent of the propellant required for six months of in-orbit operation. When the satellite is near geo-stationary orbit, deployment of two solar panels and the two antennas will be carried out and the satellite put in its final 3-axis stabilized mode.