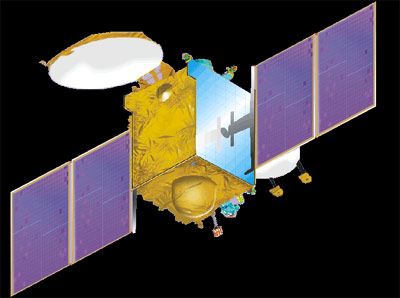 INSAT-4C is an exclusive Ku-band satellite with 12 high power Ku-band transponders providing India coverage. Launch of INSAT-4C by GSLV is planned in 2006. During the year, INSAT-4C bus and payload configuration was finalised and comprehensive design review completed for bus and payload systems. Layout of equipment panels has been finalised. Mechanical packages are under integration. Payload Integration has been taken up. Spacecraft structure has been fabricated and all flight propulsion hardware realised. Hardware-in-loop simulation was carried out. Solar panel substrates have been realised and solar cell bonding is in progress. Test and evaluation of power packages is in progress.

The Insat 4C satellite failed to reach orbit due to a launch vehicle malfunction. Shortly after the failure, ISRO announced, that they plan to launch an identical satellite by July 2007.

The replacement satellite Insat 4CR was launched on 2 September 2007, but the reached orbit was lower than planned. Insat-4CR has enough fuel to reach an operational geo-stationary orbit on its own, but the available service life was reduced by 5 years. It is to be replaced by December 2018 by GSat 31. In November 2020, it was placed into a graveyard orbit.