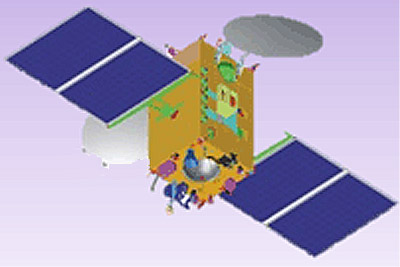 The Indian communications satellite GSAT-14 is intended to serve as a replacement for GSAT 3 (EDUSAT).

The spacecraft is configured with 6 Ku- and 6 Extended-C-band transponders providing India coverage beams. In addition, the spacecraft also carries Ka-band beacons transmitting the signals at 20 and 30 GHz, which are planned to be used to carry out studies related to rain and atmospheric effects on Ka-band satellite communication links in Indian region.

The satellite lift-off mass is 1980 kg and generates a power of around 2.6 kW. It is planned to use the existing structure and several mechanical and electrical components procured as spares during earlier projects.

GSat 14 is planned to be launched by GSLV Mk.2(1) with indigenous cryogenic upper stage.