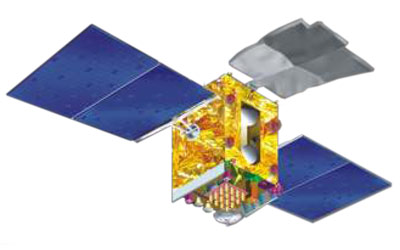 Originally it was to feature a piggyback astronomical payload, the Israeli TAUVEX-2 (Tel Aviv University Ultra Violet Explorer), which was in turn originally slated to fly on the Spektr-RG spacecraft. TAUVEX was to be mounted on a rotating table on the east surface of GSat 4. It was to be operated in a scanning mode. The TAUVEX-II payload comprising three Ultra-Violet band telescopes was developed by Tel Aviv University and Israel space agency, ELOP, for surveying a large part of the sky in the 1400-3200 Å wavelength. Due to mass constraints, TAUVEX was removed from GSat 4 shortly before launch. In February 2011, TAUVEX was finally cancelled.