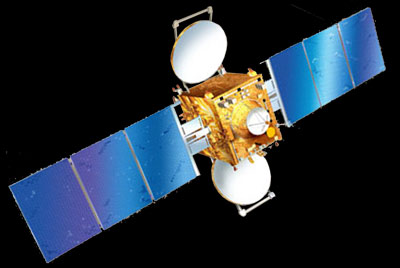 Insat's INSAT-3E is the fourth satellite to be launched in the INSAT-3 series. It is a communications satellite to further improve the communication services that are being provided by the INSAT System. With a launch mass of 2750 kg, INSAT-3E carries a payload of 24 Normal C-band and 12 Extended C-band transponders.

INSAT-3E was launched from Kourou, French Guyana by the European Ariane-5G launch vehicle into a Geosynchronous Transfer Orbit (GTO) with a perigee of 650 km and an apogee of 36,000 km inclined at an angle of 7 deg to the equator. The satellite was manoeuvred to its final circular 36,000 km Geostationary Orbit by firing the Liquid Apogee Motor (LAM) on board the satellite. The satellite is stationed at 55 deg East longitude.

The satellite apparently failed in late March 2014 and moved to an orbit slightly below the geostationary belt.