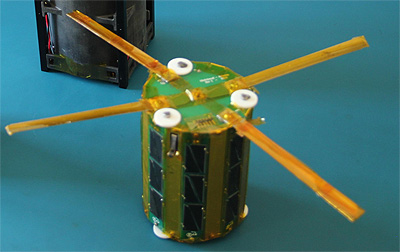 The goal of the project is to arouse the interest in Science and Technology in students, aged between ten to fourteen. The tasks range from integration, testing, assembly, coding, launching and operating the satellite, aiming students to pursue careers in the science and technology areas, especially in the Space Engineering fields. The project has received since its inception the technological support from INPE, AEB- Brazilian Space Agency and UNESCO. Additionally, it is getting a lot of repercussion in the Brazilian and World media as well as a great support from the scientific community.

Tancredo 1 was developed from a commercial kit supplied by the company Interorbital Systems (IOS), California USA, the original project has been greatly modified and improved by the project team, especially by the engineer Auro Tikami from INPE, as part of his masters dissertation. Tancredo 1 has a on-board voice recorder IC as payload, that will transmit a message chosen by a contest among students from our schools in Ubatuba. The Tancredo 1 TubeSat ground station segment will make the down and up radio data links using a ground stations located at Ubatuba which is provided by the Brazilian Space Agency (AEB).