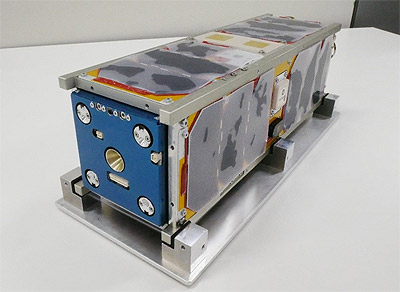 AQT-D (Aqua Thruster-Demonstrator) is a 3U Cubesat built the University of Tokyo as a demonstration of a water resistojet propulsion system.

AQT-D is composed of 1U propulsion system and 2U bus systems. The bus systems of AQT-D were designed and developed based on TRICOM-1R (Tasuki) which had been already launched and operated in 2017-2018. The propulsion system, named AQUARIUS-1U (AQUA ResIstojet propUlsion System), has one Delta-V-Thruster (F: < 4 mN) for an orbital maneuver and four Reaction-Control-Thruster (F: < 1 mN) for a reaction control. AQUARIUS-1U is a resistojet propulsion system consisting of a tank, a vaporization chamber and nozzles, using a water as a propellant (propellant mass: < 400 g). Water (H2O) enables ISS-deployed CubeSat to install a propulsion system. It is expected that the utilization of the ISS-deployed CubeSat expands drastically, because the propulsion system can lengthen its lifetime which is one of the bottlenecks of CubeSat in a low earth orbit.

The satellite was launched on board of HTV 8 to the ISS, where it was deployed on 20 November 2019.