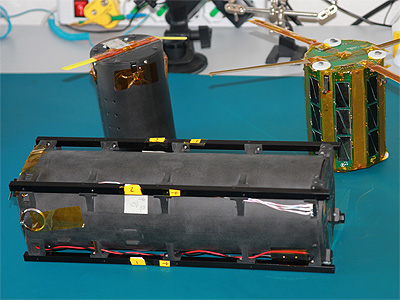 TuPOD is nanosatellite built by Gauss Srl. to deploy two TubeSats class picosatellites after being deployed from the ISS.

The TuPOD 3U mission will allow the in orbit deployment of the first TubeSats: Tancredo 1, from Brazil and OSNSAT, from Open Space Network, a Californian space company.From a technical point of view the satellite represents an innovation since its structure has been completely 3D printed. TuPOD's structure was constructed utilizing industrial 3D Printing using Windform XT 2.0 material, as first used in the ill-fated PrintSat.

TuPOD will integrate the two satellites inside a 3U CubeSat structure designed to allow the coupling between TubeSat and JSSOD launch mechanism on the ISS. The TuPOD will release the two satellites after three days, in accordance with NASA safety requirements. After the tubesat deployment, TuPOD will perform its own mission transmitting a Morse code beacon for a few days and some weeks later it will re-enter the atmosphere, disintegrating.

The satellite was launched on board of HTV 6 on an H-2B-304 rocket to be delivered to the ISS, from where it was deployed on 16 January 2017. On 20 January 2016 TuPod deployed the two TubeSats. It operated for 8 days until the batterries