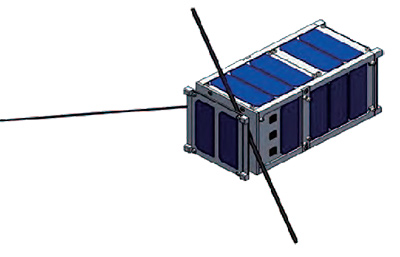 The AOBE-VELOX-3 mission is a joint Singaporean and Japanese nanosatellite mission by Nanyang Technological University, Singapore and the Kyushu Institute of Technology (Kyutech).

AOBE-VELOX-3 is a 2U CubeSat, which will test three state-of-the-art systems developed by the two institutions.

One is a micro-propulsion system by NTU which uses pulses of plasma to generate thrust. The NTU team estimates that the system can keep the nanosatellite in space for up to six months, about twice as long as the usual three-month flight time for such satellites.

It will also be used to test a Kyutech wireless communication system that taps on affordable Wi-Fi technology commonly used in mobile devices and routers. If successful, future satellite missions could use this wireless technology to help the satellite's different systems communicate with one another, reducing the need for wires in the satellite.

The third experiment will test the durability of commercial, off-the-shelf microprocessors in space.