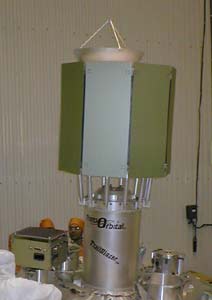 This is a structural mock-up of the planned TrailBlazer-2001 lunar probe and the kick motor carrying instruments to confirm down link telemetry a/c separation. It was built by ukrainian Yuzhnoye Design Office for TransOrbital, Inc. to test the deployment of larger payloads from the Dnepr launch vehicle. The probe mock-up remained connected with the kick-stage mock-up.

On this launch originally the TrailBlazer-2001 lunar probe was to be launched, but it was delayed due to missing ITAR export documents. As the Dnepr launch vehicle was already configured for the lunar probe, the structural test article was launched instead, being identical in mass and dimensions.