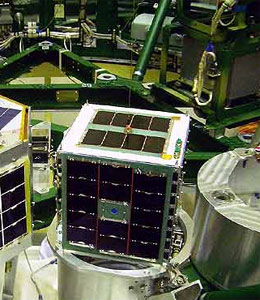 AMSAT-NA has embarked on the construction of a new Low Earth Orbit (LEO) satellite that was called AMSAT-OSCAR-E, or "AMSAT Echo" until it achieves orbit. After becoming operational, it has been renamed AMSAT-OSCAR 51 (AO 51).

Notice that with this satellite AMSAT is returning to the practice of designating LEO satellites by sequential characters. This was last done for AMSAT-OSCAR-D, which became AMSAT-OSCAR-8 after launch and commissioning. AMSAT didn't use letters for the first four Microsats and the Phase 3 series started again with "A". It has been 12 years since AMSAT-NA built and launched the original Microsats in 1990, and 8 years since AO-27 was launched in 1993. AMSAT-OSCAR-E will put AMSAT-NA back in the satellite business while providing an improved companion for AO-27, which has been very popular with hams for the past 8 years, but is getting old. Space and power are available for one or more optional payloads that will be provided by AMSAT volunteers.

AMSAT-OSCAR-E is a Microsat class spacecraft weighing approximately 10 kg. The spacecraft consists of five solid aluminum trays, each with four walls and a bottom stacked to form approximately a 10-inch cube structure. A top cover is provided for the top tray. Six solar panels attach to each of the six sides for power generation. Additionally, several antennas protrude from the top and bottom surfaces.

AMSAT Echo operated until November 2011. Fox 1A will replace it.