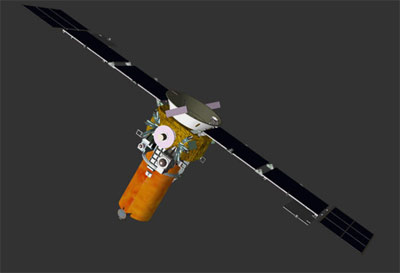 The TacSat-2 is a small technology mission of the Air Force Research Laboratory. It will build upon the experience gained with TacSat 1. TacSat 2 has now been renamed JWS D 1 (Joint Warfighting Space Demonstrator).

The spacecraft Road Runner bus is being developed by MSI (MicroSat System's Inc.) of Littleton, CO, using the spare bus and parts of the TechSat-21 program (which was cancelled in early 2003) with minor modifications. The bus structure consists of composite facesheets over an aluminum honeycomb core, comprising only 13% of the spacecraft mass. The basic structure is an irregular octagon with a "payload" and a "separation" deck. The platform is 3-axis stabilized capable of providing a pointing accuracy of < 0.15º. The ADCS (Attitude Determination and Control Subsystem) employs 3 reaction wheels (Dynacon MW-1000) and 3 torque rods as actuators. A star camera provides high-precision attitude measurements. An IMU (Inertial Measurement Unit), analog sun sensors, and a magnetometer complete the ADCS sensor suite. Electric power of up to 550 W is provided by the solar array. The Li-Ion battery has a capacity of 30 Ah. The bus power system is based on a direct energy transfer topology (tied directly to the battery via a set of FETs) delivering unregulated 28 V switched power to the loads. The C&DH (Command and Data Handling) subsystem employs a Power PC. Bus communication is provided by a Mini-SGLS (Miniature Space-to-Ground Link Subsystem), using 2 pairs of patch antennas for full spherical coverage and an encryption device. The spacecraft has a mass of 415 kg.

The ACME payload has been removed from the spacecraft to save weight.

Additionally a NASA New Millennium Payload has been added: The Inertial Stellar Compass (ISC) enables a spacecraft to continuously determine its attitude or the direction in which it is pointing. It also enables a spacecraft to recover its orientation (direction and pointing) after a temporary malfunction or power loss. This is done by the "marriage" of a miniaturized star camera and gyro system. Although this is not a new concept, the small size and low power consumption are revolutionary and an important feature for the new, smaller spacecraft and satellites of the future. ISC technology uses an active pixel sensor in a star-tracking camera and a three-axis system of microelectromechanical gyros. Draper Laboratory is the technology provider.