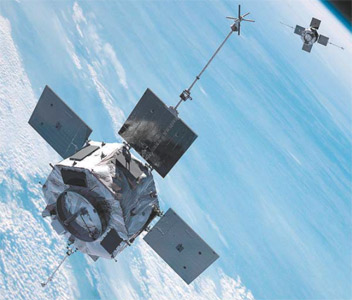 The RBSP (Radiation Belt Storm Probes) Mission, part of NASA's Living With a Star program, will provide unprecedented insight into the physical dynamics of the radiation belts and give scientists the data they need to make predictions of changes in this critical region of space.

After launch in 2012, two spacecraft will orbit the Earth, sampling the harsh radiation belt environment where major space weather activity occurs and many spacecraft operate. The mission was originally baselined for a Delta-7925 launch from Cape Canaveral, but an Atlas-5(401) launch vehicle was selected.

The two spacecraft will measure the particles, magnetic and electric fields, and waves that fill geospace. Only with two spacecraft taking identical measurements and following the same path, can scientists begin to understand how the belts change in both space and time.

The RBSP spacecraft will carry a number of instruments and instrument suites to support five experiments that will address the mission's science objectives. Because it is vital that the two craft make identical measurements to observe changes in the radiation belts through both space and time, each probe will carry the following instruments:

The RBSP propulsion subsystem is a monopropellant hydrazine system that provides orbit maintenance, spin-rate adjustments, and changes in velocity for each spacecraft. The propulsion system consists of eight 0.9 Newton Aerojet MR-103G thrusters. The propellant and pressurant are stored in the three identical tanks, which are spaced equally around the spacecraft spin axes.