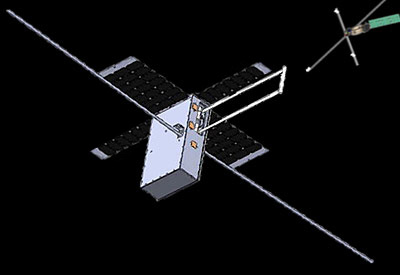 DSX is a larger (~500 kg) mission which plans to study the magnetosphere from medium-earth orbit (MEO). The DSX payload includes the Wave Particle Interaction Experiment (WPIx) designed to study wave particle interactions with 0.1 to 50 kHz VLF transmissions in the complex plasmas trapped in Earth's magnetosphere. In order to compliment this experiment, the VPM spacecraft will fly in low-earth orbit (LEO) to measure the presence and intensity of VLF transmissions from DSX as well as their effects on the local electron population. The data received from VPM can be analyzed in coincidence with that obtained by the DSX WPIx equipment to obtain an unprecedented, simultaneous evaluation of two points in the inner magnetosphere.

VPM demonstrates the nanosat architecture as a highly capable experiment platform and introduces its capability to enhance existing missions. This type of flight constellation introduces a low-cost, highly versatile method of analyzing the dynamic space environment.