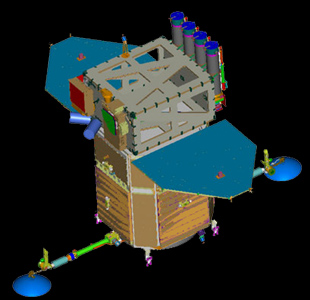 The SDO (Solar Dynamics Observatory) solar observing satellite will be a follow up to SOHO. SDO has four main goals:

SDO will contain a suite of instruments which will provide the observations that will lead to a more complete understanding of the solar dynamics that drive variability in the Earth's environment. Following instruments are mounted on the spacecraft:

The large data outtput (> 1 TByte/day) dictated the use of a geostationary orbit for continuous data downlink via a Ka-band transponder.