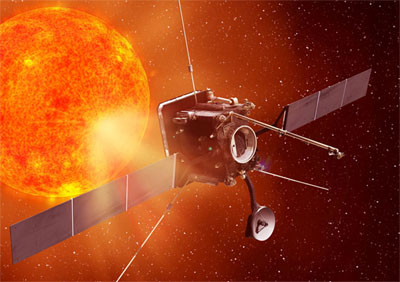 Solar Orbiter (SolO) is a solar probe intended to brave the fierce heat and carry its telescopes to 42 million km to the sun, nearly one quarter of the Earth's distance from the Sun, where sunlight will be thirteen times more intense than satellites in the vicinity of the Earth feel it. The spacecraft must also endure powerful bursts of atomic particles from explosions in the solar atmosphere. The reward will come in the form of sharp images obtained together with unprecedented measurements of the local near-Sun phenomena.

The pictures will show details down to 200 kilometers wide, with a tiny fraction of the width of the Sun's visible disc, 1.4 million kilometers.

The scientific goals of the Solar Orbiter are:

The Solar Orbiter spacecraft provides a stable platform to accommodate the combination of remote-sensing and in-situ instrumentation in an electromagnetically clean environment with 37 unobstructed fields of view for 21 separate sensors.

The spacecraft provides a thermally stable environment and a stable pointing platform for the instruments on board. To cope with the extreme solar radiation at perihelion, a sunshield, always pointing to the Sun, protects the spacecraft and provides openings to let the instruments view the Sun. Solar Orbiter will exploit new technologies being developed by ESA for the BepiColombo mission to Mercury, the closest planet to the Sun.

The Solar Orbiter payload, devised to address the science goals of the mission, accommodates a set of in-situ and a set of remote sensing instruments, with a total payload mass of 180 kg.

The remote sensing instruments will observe the Sun's surface and atmosphere. The gas of the atmosphere is best seen by its strong emissions of short-wavelength ultraviolet rays. Tuned to these will be a full-Sun and high-resolution imager and a high-resolution spectrometer. The outer atmosphere will be revealed by ultraviolet and visible-light coronagraphs that blot out the bright disc of the Sun. To examine the surface by visible light, and measure local magnetic fields, Solar Orbiter will carry a high-resolution telescope and magnetograph.