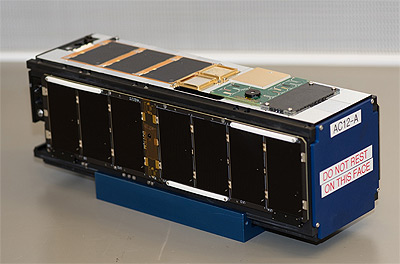 Aerocube 12 (AC12) are a pair of 3U Cubesats developed by the Aerospace Corporation of El Segundo to demonstrate a the technological capability of new star-tracker imaging, a variety of nanotechnology payloads, advanced solar cells, and an electric propulsion system on one of the two satellites.

The AeroCube 12 A and B experiments build upon technologies tested on the AeroCube 8 (IMPACT) AC8 CubeSats, which launched in 2015 and 2016.

The AeroCube 12 A and B project consists of two 3U Cubesats launched from the NanoRacks CubeSat Deployer mounted to the external surface of the Cygnus CRS-9 spacecraft. By launching externally, the CubeSats are raised to an altitude of approximately 500 km prior to deployment, providing them with a longer orbital lifetime than if they were deployed from the International Space Station (ISS). The longer orbital lifetime is important in determining how these payloads age in the space environment. The AeroCube 12 A&B satellites demonstrate a Scalable ion-Electrospray Propulsion System (SiEPro) that is based on the extraction and acceleration of heavy ions using strong electric fields applied at the interface between the propellant and the vacuum of space. The system uses field evaporation to generate charged particles, which has the advantage of not needing any reaction volume for the production of ions. Typical ion thrusters require a reaction chamber into which a molecular gaseous substance is injected to then be ionized by electron bombardment or other methods. Additionally, the propellant, held by a porous substrate and guided through planar emitters, does not need to be pressurized and flows exclusively by capillarity forces. Eliminating propellant lines, valves, tanks and pressurization complies with the size and weight limitations of CubeSat designs.