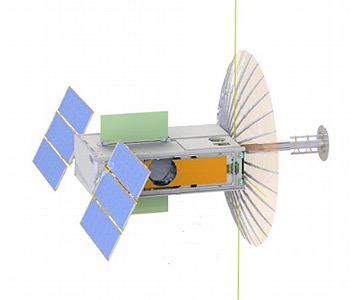 Radix is a 6U CubeSat mission by Analytical Space test a LEO satellite data relay system involving RF crosslinks and an optical downlink.

The overall goal of the Radix mission, is to test a laser communications downlink.

Radix has a powered parabolic dish and wideband antennas (unpowered) that are connected to a software-defined radio (SDR). This system is not operable upon launch. This software-defined radio is a commercial-off-the-shelf-part that can be programmed for either receive or transmit. In addition to laser downlink testing, the primary goal of the Radix mission is concerned with only the receive capability of the SDR and parabolic/wideband antennas.

Beta test clients, if found before deorbiting, will crosslink data from their own satellites using RF, Analytical Space will store that data onboard, and then downlink using optical to a ground station. RF will be used for TTC and back-up data downlink. Beta test clients will submit their own STAs for their new satellites or submit a STA to add to their existing authorizations, as applicable, to ensure proper spectrum usage and mission authorization. Experiment slotted to begin in October but exact dates of experiment may shift upon final flight schedule with launch currently booked through Nanoracks and deployment to be from the ISS. Regardless of launch date,

The satellite was launched as a secondary payload aboard Orbital Sciences CRS Cygnus OA-9 and taken to the International Space Station. It was deployed from the ISS in a 400 km circular orbit, on an inclination from the equator of 51.6°, on 13 June 2018. Transmission will begin 45 minutes after deployment, and cease 6 months after that. The demo satellites operations will not exceed 6 months and no part of the satellite shall survive re-entry.