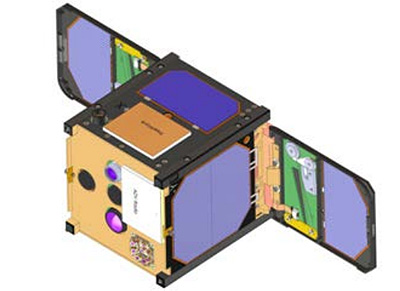 AeroCube-4 was a CubeSat technology demonstration mission within the PicoSat Program of The Aerospace Corporation, El Segundo, CA, USA. The AeroCube-4 CubeSat series of 3 spacecraft was also designated as AC4-A, AC4-B and AC4-C. Two of the Aerospace-4 CubeSats were built for a national security agency. The third CubeSat was built for the for SMC/XR (Space and Missile Systems Center/Development Planning Directorate). The 3 satellite AeroCube-4 constellation was operated by The Aerospace Corporation.

The SMC/XR AeroCube-4 was a CubeSat with a 1U form factor and a mass of ~1.2 kg that contains various first of a kind mission technologies, including solar panel wings that close and open to tune the ballistic coefficient enabling efficient formation flying, three-axis attitude control to 1º absolute accuracy.

AeroCube 4A and 4B, also called the AeroCube 4.5 series, were successfully launched with AeroCube 4 and implement a smallsat communications tech demonstration.

AeroCube 4C consists a launch vehicle environment data logger, which measures launch vibration in-situ, and contains a deorbit drag device that will be mechanically deployed at the end of its primary mission (size of 0.3 m2).

All three satellites were successfully launched on an Atlas-5(401) rocket.