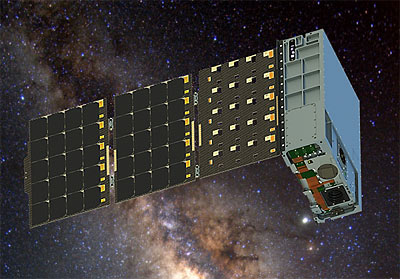 The HaloSat is an astronomical 6U CubeSat mission to study the Hot Galactic Halo.

This is an astrophysics science investigation mission to map the distribution of hot gas in the Milky Way and determine whether it fills an extended halo or the halo is compact with no contribution to the total mass of the galaxy. It will measure the oxygen line emission from the hot Galactic halo. A dedicated CubeSat enables an instrument design and observing strategy to maximize the halo signal while minimizing foregrounds from solar wind charge exchange interactions within the solar system.

The payload consists of threee XR-100SDD X-ray detectors. These X-ray detectors are silicon drift detectors (SDDs) commercially available from Amptek. Three redundant detector assemblies include an SDD, X-ray collimator, anti-coincidence shield, and all electronics. The baseline mission requirements can be achieved with two operating detectors; the minimum mission with one detector.

The satellite is built by Blue Canyon Technologies based on their XB1 bus and the L3 Cadet radio.

It was selected in 2017 by NASA's CubeSat Launch Initiative (CSLI) to be launched as part of the ELaNa program. It was launched on the ELaNa-23 mission on board of Cygnus CRS-9 to the ISS, where it was deployed on 13 July 2018 via the JEM airlock.