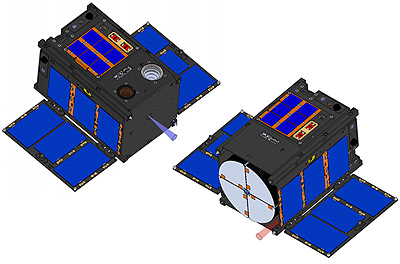 Aerocube 10 (AC10) are a pair of 1.5U Cubesats developed by the Aerospace Corporation of El Segundo to demonstrate several technologies.

The purpose of the mission is to demonstrate

The AeroCube-10a spacecraft has two payloads. The first is a dispenser with a magazine of 29 identical atmospheric probes. Each probe weighs 16 grams and consist of three 98 mm diameter aluminum sheets at 90 degrees to each other, effectively forming a sphere. The intent is to be lightweight and have a constant cross section, independent of orientation to the velocity direction so that atmospheric drag can be measured in-situ. RF modeling predicts that the atmospheric probes will have a radar cross section equal to 1U CubeSats, which have been tracked on-orbit many times. The probes are dispensed individually upon command and it is predicted that each has a lifetime of 0.74 years when deployed from the highest altitude of 500 km. The second payload is an optical beacon. It is used to verify that the AeroCube-10a satellite is indeed pointing at the AeroCube-10b. It consists of a 4 W laser diode with a 1° full-width-half-max beam divergence.

The AeroCube-10b spacecraft replaces the payload volume area used for the dispenser on the 10a satellite with three different payloads. One is a steam propulsion unit identical to the one in AeroCubes-7b and 7c. It will dispense water vapor to create a 4 mN thrust to change the range between the two satellites. It holds up to 30 grams of water and can affect, best case a 10 meter per second delta velocity. Water is non-toxic and the pressure inside the steam propulsion unit is at atmospheric pressure, so it is not a pressure vessel. The other is an electron and proton spectrometer called the micro-Charged Particle Telescope (μCPT). It will measure radiation flux impinging on the satellite, in specific energy levels that are suspected to cause solar cell degradation. The third payload is a sensor that will confirm when the optical beacon is impinging on the satellite. It is a light sensor, tuned to the optical beacon and amplified because the intensity is predicted to be faint.

The satellites were deployed on 8 August 2019 from Cygnus CRS-11.