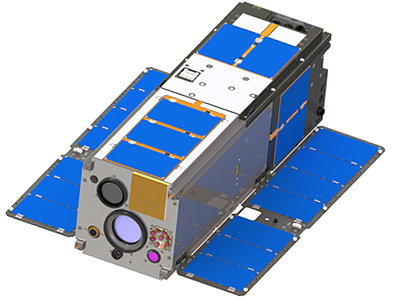 The AeroCube 11 (AC11) or TOMSat (Testbed for Optical Missions Satellite) spectral satellite are two nearly-identical spacecraft featuring multispectral, pushbroom imagers that fly the Landsat-8 visible bands in a 3U Cubesat package. The goal of AC11/TOMSat is to show that these sensors perform comparably to flagship missions, such as Landsat.

The second AC11/TOMSat spacecraft will host an SB-501 focal plane array that will image terrestrial, lunar, and stellar targets.

Both satellites will have a laser communication downlink.

It will demonstrate the utility of CubeSats to perform remote-sensing missions at a performance level comparable to that of larger spacecraft. The bus includes a 2.5-cm-diameter telescope paired with a visible-light sensor, 3-axis attitude control, 8 GB of image storage space, and a laser transmitter to downlink the images at a very high rate (up to 200Mbit/sec). The project began in mid-2014 and will be delivered in mid-2017, to be launched into a 500 km, 85° inclination circular orbit. With a ground sample resolution of 40 m and a field of view close to 50 km, the payload will produce data useful for agricultural and mineral surveys and coastal water quality monitoring, among other applications.