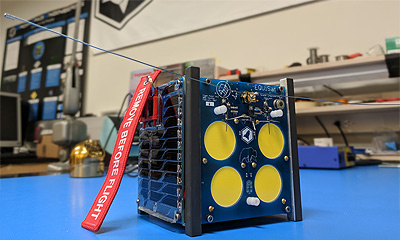 EQUiSat is an educational 1U cubesat mission under development by the Brown University to demonstrate a LED beacon visible to the naked eye at night and will transmit data about its health and position.

EQUiSats primary payload is a radio, which will transmit data on the health of its systems and its orientation relative to the Earth and sun to Earth receivable on ham radio, and a high power LED beacon array, which when flashed will appear on Earth as bright as the North Star. The payload will be used to engage those on earth, especially in pursuit of the projects primary mission, which is to make space more accessible to the public.

The secondary payload are the lithium iron phosphate (LiFePO4) batteries that will power the radio and LEDs. The secondary mission of EQUiSat is to test the viability of LiFePO4 batteries, which have never been flown in space, making the batteries more than power storage units but a payload themselves.

EQUiSat is constructed by a small team of undergraduate engineering students with a small budget and only off-the-shelf products.

It was selected in 2014 by NASA's CubeSat Launch Initiative (CSLI) to be launched as part of the ELaNa program. It was launched on the ELaNa-23 mission on board of Cygnus CRS-9 to the ISS, where it was deployed on 13 July 2018 via the JEM airlock.

The satellite worked until reentry on 28 December 2020.