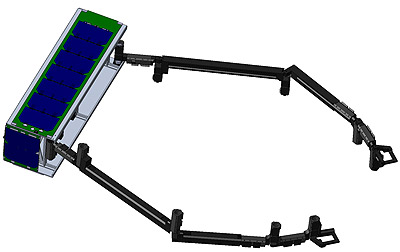 RSat-P (Repair Satellite-Prototype) is a low cost 3U CubeSat built by the US Naval Academy Satellite Lab to demostrate capabilities for in-orbit repair systems.

RSat is part of a technology demonstration mission to provide an in-orbit mobile platform to survey and possibly repair a much larger, conventional spacecraft. This component of the system comprises a 3U CubeSat with two 60 cm, 7 degree-of-freedom robotic arms fitted with claws and is intended to demonstrate diagnostic and repair capabilities by validating five robotic functions in orbit.

There are four primary flight demonstrations:

It was launched on the ELaNa-19 mission.